A Lot at Stake!

Spring is now in full swing, but the weather can still catch us out with frosts! By the end of the month we should be frost free but if you want to get ahead with your summer planting, it is always a good idea to have fleece or a cloche handy. When bringing home your bedding plants from your local garden centre it is essential to harden off plants grown under glass so they are ready to be planted outside. The plants you have purchased are likely to have been grown in ideal conditions and need hardening off before planting outside in variable weather conditions. To do this, put the plants outside on milder days and nights, gradually exposing them to more and more time in the outside conditions. On colder days and nights, bring them back under glass or cover with a fleece, gradually reducing the cover until they are out 24/7 and acclimatised to the growing conditions outside. Nipping out the growing tips of plants whilst you are hardening them off will produce a bushier plant with more flowers.

If the bedding plants you’ve purchased are destined for hanging baskets and patio containers then plant them up with a good quality tub & basket compost and add water retaining gel and a slow release fertiliser. This will give your arrangement the best possible start. The planted pot or basket can then be hardened off as described above whilst still putting on growth.

In the flower borders May is a good time to think about the ‘Chelsea Chop’ which is a great way of stopping some plants getting too big and leggy, and with others, staggering flowering times. Traditionally carried out in late May, (about or after the Chelsea flower show after which it is named), the idea is to prune the plant back by about a third, which means reducing the plant stems. You can either chop the whole plant, or selected plants in the group or cut back individual stems on the plant to stagger flowering. Experiment to vary flowering times and to make plants more bushy.

By chopping back plants that tend to get very leggy later in the year, this will check that growth and the plant will throw out more shoots and flower later. This makes it less leggy and more bushy. The Chelsea chop is really a light prune and the result is a more compact plant which will flower slightly later. Whilst May is the traditional month for this, it does depend on the growing season as the plant needs to have put on enough growth to make the chop possible.

Now is the right time to put supports in place for your perennials that will need it as they grow. Many plants need support, such as Peonies, Oriental poppies, Delphiniums and Lupins. Staking and putting supports around plants, particularly the herbaceous perennials, helps them to look their best when in full bloom later in the year but it becomes more and more difficult to insert the stake as the plant puts on more leaf. If the plant is more mature, it is tricky to get the support in place without damaging plants or the budding flower heads. It is so easy to leave this job until it is too late, so be warned! Staking and supporting plants has a number of purposes; it supports stems so they do not lie over or swamp neighbouring plants. Some of the more vigorous perennials can grow over the neighbouring plants and smother them. The choice of support depends on the type of plant; Peonies do well with a grid support whilst Delphiniums are better suited to individual stakes and plants such as Crocosmia respond well to firm supports to keep the plant upright, linked supports work well for this.

Herbaceous Peonies provide invaluable colour to borders in late spring and early summer. Their large, often double flowers in whites, pinks and reds add an element of romance and glamour to any garden. With basic care they can provide colour and enjoyment for many years;

• Ideally plant in full sun, although a few varieties will tolerate light shade.

• Peonies are relatively drought tolerant when established though flowering may be impaired during particularly dry spells at the time of flower bud development.

• Feed with a balanced general fertiliser such as Growmore in the spring.

• Mulching around the base of plants will conserve moisture and suppress weeds. Avoid covering the crown itself.

• The flower stems may not be strong enough to keep the often heavy flamboyant flowers upright and staking is often required.

• It is generally best to cut the foliage to ground level as it dies back in the autumn to reduce the risk of Peony wilt. 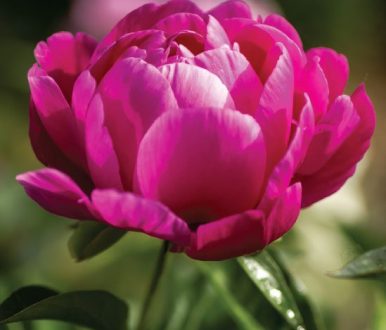